You are here: Home1 / Ladies return … and go joint top

After three months away from action due to postponements, Wellington hosted Bishops Lydeard Development for the second time this season.

After joining the club in January, debutants Sidnay Clarke and Claire Sweet were eager to put on the tangerine jersey and get their Wellington careers started. Leah Morrell also made her first appearance of the season after a short absence away.

Both teams started strongly and the action was end to end for the first 15 minutes, but this was exactly the kick Wellington needed to dust off their shooting boots with Jess Regan blasting in Wellington’s first of the afternoon after a lovely through ball from player-of-the-match Katy Hussey.

This lead did not last too long as Bishops Lydeard responded with a well-placed finish into Hannah Worth’s bottom left corner five minutes later.

With the scores level, Wellington pushed hard to regain the lead and keep their hopes of taking the top spot in the league alive.

Then ten minutes before half-time, Katy danced through the middle of the field until she reached the edge of the Lydeard 18-yard box and released a rocket to put Wellington back into the lead.

Wellington were able to hold Lydeard during a tense second half to take three points.

Another win puts Wellington joint top but they have two games in hand and will hope to take advantage to grab top spot in their own right.

Next week, the Ladies visit Ash Rangers for another highly-anticipated match. 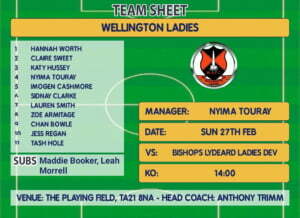 Next week, the Ladies visit Ash Rangers for another highly-anticipated match.