Going into the game on a high following their excellent draw with promotion hopefuls Mousehole, they turned in a display full of confidence to hit the 40-point mark for the season. 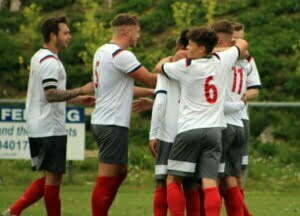 There was only one change to the starting 11 with regular keeper Shay Allen returning in place of Rob Hall and, when the game got under way, Wellington picked up where they had left off the previous Saturday.

Jordan Casey rolled a shot just wide before they took a deserved lead after 14 minutes. Jason Quick sent over a corner from the right and defender Mark Cornish stooped to score with a perfectly-placed header just inside the post.

Wellington were always on top in the first half without being able to add to their tally and, indeed, were indebted to Allen for a superb flying save to deny Jack Langford before the break.

Jake Quick missed a good chance to make it 2-0 shortly after the re-start but the visitors were not to be denied and did double their advantage after 53 minutes.

Casey played the ball into the box and Ilfracombe defender Scott Huxtable, attempting to clear the danger, only succeeded in turning it past his own keeper.

Wellington now had their tails up and virtually sealed the points with a fantastic end-to-end goal after 64 minutes.

Jason Quick played an excellent ball up the left to release his brother Jake, who crossed to Casey and he took his time before thumping home an unstoppable shot.

Wellington were again indebted to Allen for a magnificent double save in the 85th minute but still had the final say with a fourth goal in injury time.

Again it came on the break and again Jake Quick was the supplier, this time crossing for young Eli Collins to sidefoot home.

Wellington are finishing their season with a flourish and can now look forward to their final game – a long trip into Cornwall on Monday to take on Helston Athletic.

To see more photos from the game, CLICK HERE.