You are here: Home1 / Victory in Cornwall crowns fine end to season

Wellington finished their season on a high with an excellent Easter Monday win in Cornwall to complete a five-match unbeaten run.

Tim Legg’s young side had won two and drawn one at home, leaving them with two tricky away fixtures to finish.

But they thumped Ilfracombe Town 4-0 on Good Friday and then dispatched Helston to move up into 13th place in the table and take their final points tally in a tough division to 43. 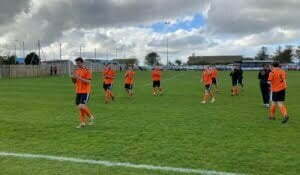 Legg was missing both central defender Tom Stone and striker Jake Quick so skipper Glen Wright returned at the back with promising midfielder Jamie Nicholson coming in for his first start since completing a suspension.

Both were pivotal in the victory although it was an outstanding performance from the whole team as the visitors weathered an early storm to take control against a side many felt would be among the title contenders when they joined the league last summer.

Keeper Shay Allen pulled off a couple of smart saves in the opening exchanges before Wellington took the lead with a great move after 15 minutes.

Sam Towler played a superb pass out to Nathan Byrne on the left and his cross was deftly laid back by Jordan Casey to Towler who had continued his run goalwards. The midfielder’s drive was parried by keeper Mike Searle but Douglas Camilo shot home from the rebound.

That took the wind out of Helston’s sails and Wellington doubled their lead on the stroke of half-time thanks to three of their talented youngsters. Eli Collins and Nicholson drove forward with the ball then being fed to Byrne, who fired an unstoppable shot in off Searle.

It looked like the home side had been on the receiving end of some harsh words from manager Steve Massey as they came out with all guns blazing after the break.

But, again, Wellington repelled all their attacks and they went further ahead after 64 minutes. Jason Quick delivered a magnificent free-kick from the right and his fellow defender Mark Cornish ran in unchallenged to head home his second goal in successive games.

They were then able to close out the game as Helston seemed to run out of ideas and, although in-form Allen produced a couple of cracking saves, Wellington could also have made it four with sub Josh Baker denied by Searle in the closing minutes.

At the final whistle, the Wellington squad acknowledged the support of those who had made the 270-mile round trip (photo above).

With two victories and an 8-1 win for the promotion-chasing Reserves sandwiched in between, it was definitely a happy Easter for the club.

To see more photos from the game, CLICK HERE.