Chairman’s thanks to Reserves bosses

You are here: Home1 / Chairman’s thanks to Reserves bosses

Club chairman Mike Hall has paid tribute to Steve Trevelyan and James Baker (pictured below) who have decided to step down from running our Reserves.

Having taken over from Sean Buttle and Dave Darch, the pair guided the team to fifth spot in Division One of the Joma Devon and Exeter League.

Mike said: “We were proud to appoint two former players who had come up through our youth ranks and they have done a great job.

“They produced a team full of talented youngsters and whoever takes over from them will definitely have plenty to build on.

“We’d all like to thank them for their work over the past season.”

Steve (Reserves manager) said that he wanted to devote more time to coaching the youngest players within our club while James (assistant manager) wanted to spend more time with his family.

“We’ve really enjoyed working with the lads,” he added. “It’s been a blast.”

Mike Hall said the club would be seeking applications to run the Reserves in due course.

In the meantime, anyone interested in discussing the position, should contact club secretary Jeff Brown – email jeffandjane@talktalk.net 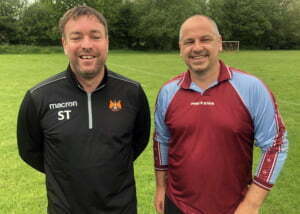