You are here: Home1 / Battling Reserves pipped by leaders

On a bright beautiful day and playing on an well prepared flat surface, it was Wellington who got off to the brighter start. Jamie Fleet came close from a corner, but his free header went over the bar.
Oli Nott’s inclusion in the team gave them extra creativity and as his long range shot was parried, Josh Hawkings couldn’t quite snatch up the rebound.

With greater height in the Chagford team, set pieces were always going to be a challenge. This proved true in the 25th minute as they took an undeserved lead from their first corner which was met brilliantly by their decent striker whose header flew high into the far post top corner.

Wellington responded well and matched the physical approach of their opposition head on. Opportunities came and went but half-time arrived with the score 1-0.

The second half continued in the same vein and Wellington’s neat passing football resulted in a glorious chance on 55 minutes. Connor Pengelly crossed brilliantly to the far post for young Tennessee Harlow to meet it with a powerful header only to see it hit the back of the head of a clueless Chagford defender and go clear. 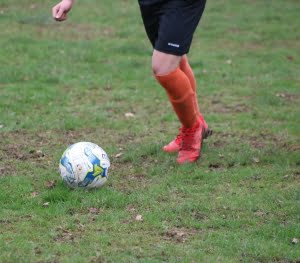 The game became more stretched as Wellington pushed forward for an equalising goal with both teams going close without success.

Tyler Fyfe and Robbie Broomhead replaced Harlow and Jordon Mace on 70 minutes but, six minutes later, Chagford extended their lead. A long throw in was missed by two players before finding its way to the far post where an unmarked player just tapped the ball home for a disappointing goal. Alex Conway replaced cousin Josh Hawkings with 11 minutes remaining.

Wellington scored on 82 minutes and what a goal it was! Man-of-the-match Josh Pearson broke from the back, battled his way past a couple opponents before unleashing a top corner bending bullet from fully 25 yards with the home keeper completely motionless.

The final ten minutes were hectic but Wellington couldn’t find the equalising goal their performance deserved. There were a huge amount of positives to be taken from this performance, none more so than the belief mindset which has become stronger in this young squad. Keep it going, lads!