You are here: Home1 / Second Easter defeat for first team

Wellington gave a spirited performance but suffered their second Easter local derby defeat as they went down 3-0 away to title-chasing Willand Rovers at Silver Street. 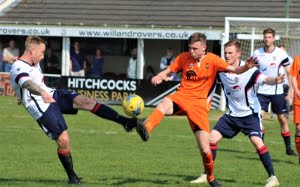 Manager Clive Jones was forced to make one change with Joe Chamberlain ruled out by injury and so youngster Joe Wylie came back into the team.

Willand, with three games remaining, are one of a trio of clubs separated by a single point in the closest championship race for years and yet Wellington got off to a bright start with both skipper Glen Wright and Jack Bryant shooting wide of the target.

However, the home nerves were settled as they took the lead in clinical fashion after nine minutes – the ball was slipped through to Brad Auden who finished coolly past keeper Josh Mclean. They nearly went further ahead only three minutes later when a header from Craig Duff smacked against the post but Wellington weathered that storm and there was never much between the sides for the rest of the half.

The Willand keeper got down well to save from a Jack Bown-Porter header and a couple of dangerous crosses from the visitors saw no-one on the end while Willand went close with a header from a corner just before the break.

The game’s turning point came after 52 minutes as Willand increase their lead in controversial circumstances. Luke Auden stooped to head home a cross from the right with Wellington adamant that Mitch Woodgate had been fouled off the ball. 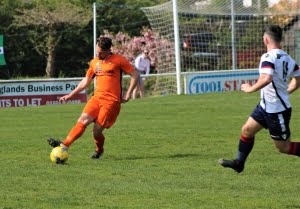 The visitors refused to lie down and Josh Wadham saw a free-kick well saved while Scott Drayton volleyed over the bar although Willand never really looked in danger of losing their lead. They made the game safe with five minutes remaining as a long ball put sub Dean Stamp through and he rounded Mclean to score into an empty net.

Wellington must now pick themselves up from a double holiday weekend defeat for their final game of the season away to Clevedon Town this Saturday.

Reserves finish off with home defeat