You are here: Home1 / First team end season on a losing note

Wellington ended their season in the Toolstation Western League Premier Division with a third successive defeat at Clevedon.

Left without the services of Jack Bown-Porter, George Rogers and the promising Joe Wylie Wellington were outplayed by the young, skilful and energetic Clevedon team and despite being only a goal down until the 70th minute never seriously looked like they were going to get a result. 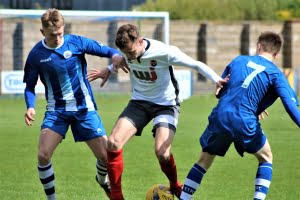 The wind made conditions a little difficult but the home team coped much better and played some good football with Will Mann dominating in their defence, Callum Kingdom controlling much of the midfield and centre-forward Sam Bell leading an attack which always looked dangerous.

Wellington could have taken an early lead when a quick ball was played through for Joe Chamberlain who had run in behind the defence and he bore down on goal but seemed to get the ball in under his feet, tried to round the keeper but got dispossessed and the chance was lost. Play swung from end to end but the visitors were unable to get any fluidity in their play as Conor Bryant found himself well shackled by the dominant Mann.

After 25 minutes, a poor clearance by Wellington’s defence was intercepted but Scott Drayton still had a chance to clear but was caught by Bell who turned inside and shot into the corner of the net from the edge of the box. Wellington’s best efforts in the opening period were a well-struck Glen Wright shot which went straight to the keeper and a good move between Lewis Pocock and Josh Wadham which saw the latter cross to Conor Bryant but his effort was wide of the target. 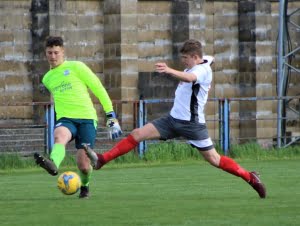 At the other end Ryan Jones set up George King for a shot which went just wide and Bell tested Josh Mclean in the Welly goal but he manage to scrambled the ball to safety.

The second-half saw tricky full-back Vincent Harper waltz past three defenders and send in a shot from six yards crashing against the crossbar but the warning signs were there as the home team began to dominate play. Wellington had one good move when the ball was crossed for Conor Bryant to send a glancing header just wide but the home team were causing problems with Bell and substitute Harry Smith drawing good saves from Mclean.

They were not to be denied, however, and Jones found himself in space behind the defence to score from the edge of the box after 70 minutes. Three minutes later Tim Legg, who had worked tirelessly at the back, was caught in possession by substitute Lucas Vowles who added a third goal, and virtually ended the game, his shot going in off the far post. Bell was justly rewarded for his efforts with a second strike whilst Wellington managed a late rally but were unable to reduce the arrears.

Apart from Tim Legg at the back, captain Wright gave another afternoon’s hard graft in midfield but the team seemed to lack cohesion and too many players would have been disappointed with their afternoon’s work.

Wonderful day to remember our Neil
Scroll to top