However, the result does not tell the whole story of a traumatic week at the club following the news that they had parted company with previous boss Clive Jones. 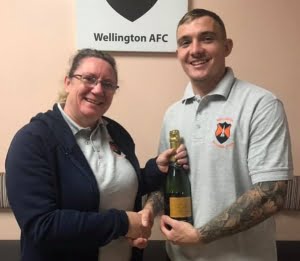 Legg was left with only a handful of the players who had beaten Odd Down 5-0 the previous week and, as a result, his first line-up included a host of new signings

But the unfamiliar starting 11 did him proud in a goalless first half and slightly held the edge with newcomers George Sinnott and Charlie Dodd both going close while the promising Ollie Holman had a ‘goal’ ruled out for offside.

It was a different story after the break as Heath took the game to Wellington and went ahead after 57 minutes when the ball was slipped through to Enis Akgun and his short squirmed in at the near post.

Wellington pushed for an equaliser but that left them exposed at the back and Heath sub Ethan Tucker lifted the ball over the bar when clean through before hitting the post with a shot when he seemed odds-on to score.

Legg switched to 3-5-2 for the closing stages and the move paid dividends with an injury-time equaliser as sub Paolo Borges beat his man on the left and his cross sailed over the head of keeper Oliver Jones and into the net.

A draw was a fair result and Legg can now look to build for the future.

Cracking win for the Reserves