Cracking win for the Reserves

You are here: Home1 / Cracking win for the Reserves

Despite the recent changes at the club, the Reserves had a familiar look to their squad as they travelled to the unpredictable Newtown.

The most noticeable absentee was Paul Pocock after the manager decided his position was no longer tenable and so left to the disappointment of many. 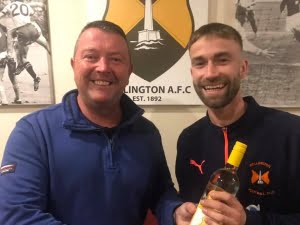 But, as the saying goes, ‘the show must go on’ and his assistant Sean Buttle agreed to carry on Pocock’s previous good work for the foreseeable future.

Despite the changes, the players put their opinions and egos aside and agreed that football on the pitch is where they should be focused. Credit to them.

Playing on a narrow but well-groomed pitch, the visitors started slowly and, while Newtown had the lion’s share of the opening exchanges, they never really created a clear opportunity. After weathering a frustrating 15 minutes, Wellington were beginning to show glimpses of potential.

The opening goal came in the 27th minute and veteran, Darren Mace claimed it for his third of the season. Good work down the right led to Robbie Broomhead flicking on for Clay Westcott to run on to. His low cross picked out Mace at the far post, who hit a sweet first-time shot which flew past the home keeper.

Mace nearly had a second ten minutes later as he wriggled free of two defenders but fired his shot straight into the arms of the keeper. Other half chances came and went before the half finished with Wellington going in 1-0 up.

More composure and sharper passing were the instructions at half-time.

Wellington made a much better start to the second period and were soon rewarded. Broomhead, who was woken by a ball to the face only minutes earlier, hit an absolute screamer in the 51st minute. After some good pressure from Thorne and Saunders the ball broke out for Broomhead to run on to and he hit a sumptuous left-foot volley which left the keeper completely rooted as it flew past him and high into the net. This single incident seemed to flood the players with belief and from this point on, they dominated their opposition.

More chances came and went as Wellington pressed for a fourth. With 10 minutes remaining, Poulsom broke free at pace on the left. He made his way into the box before being hauled down for a penalty. Conway stepped up but failed to convert the spot kick.

Wellington were well on top, but didn’t take any more of the chances they made and the game finished 3-0 – a much-needed three points and a morale-boosting second half performance.

A team hit seven to go back on top