A team pipped in cup thriller

You are here: Home1 / A team pipped in cup thriller

There were six changes to the starting 11 from the previous game with a further three players making their first appearances of the season from the bench.

Welly were kicking against the wind first half and, two minutes in, the Galmington winger ran through and slotted the ball home to make it 1-0.

After the goal, Welly woke up and created a couple of half-chances through a Merry shot and Davies’ flicked header which dropped just over the bar.

But a Welly throw-in then somehow resulted in Galmington winning the ball back high up the pitch to make it 2-0. The last 20 of the half were fairly even with Welly creating a couple of half-decent chances.

In the second half, Welly started well and Davies played Rohan Poulsom through to head over the keeper and make it 2-1. Two minutes later, Poulsom ran through and played in Jordan Sellick for the equaliser.

Another two minutes and a low ball saw Jordan Sellick flick past the keeper to make it 3-2 to Welly with only ten minutes played in the second half.

Then there was a penalty to Galmington but Sullivan Harlow guessed the right way to pull off a great save.

The next 20 minutes were fairly even but, with ten minutes left, Galmington made it 3-3 and, a minute later, a mix-up in the Welly defence saw them take the lead. Welly pushed for an equaliser but just couldn’t get one this time.

From the outside in, it looks like a mistake to make so many changes but, from the inside out, it has definitely given the management team some more selection headaches moving forward.

Welly get back to the real action next week as they face Porlock at home.

THE following day proved a Saturday washout with both the first-team game at home to Street and the Reserves’ match at Winchester called off because of waterlogged pitches. 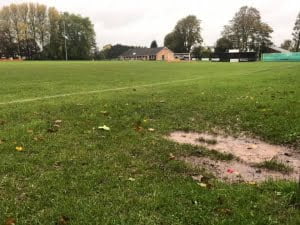 U18s bow out of league cup
Scroll to top