You are here: Home1 / New-look first team go down fighting

Wellington’s young side could hold their heads high despite suffering their first defeat under new manager Tim Legg at Shepton Mallet. 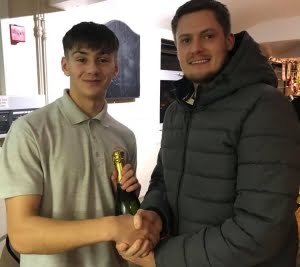 At the end of August, Wellington had been thumped at Shepton in the FA Vase but this performance was a huge improvement and the new-look squad were desperately unlucky not to come away with at least a point from another encouraging display.

Legg, who has had to rebuild the side following the departure of previous boss Clive Jones, went into a tricky fixture without skipper Glen Wright and new defender Jake Horsey – both unavailable – while winger Ian Bellinger was suspended.

Wellington knew they were going to be up against it in the first half as they played up the Shepton slope and with the elements in their faces but they defended well throughout the goalless 45 minutes.

Indeed, it was the visitors who tended to look more threatening with Boyle firing just wide after nine minutes and then George Sinnott having a ‘goal’ disallowed seven minutes before the break.

But all the hard work was shortly undone within two minutes of the restart as Shepton’s danger man Tyrone Tucker-Dixon was given too much space on the right and his low cross somehow found its way into the net.

The Wellington reaction was swift as they drew level within five minutes. Sinnott burst down the left and also sent in a low cross, which was neatly dispatched at the far post by Boyle.

The game was evenly-balanced but turned in the home side’s favour on 69 minutes when they were lucky to be awarded a corner as Tucker-Dixon sliced a long-range effort high and wide.

The ball was duly floated over and defender Keiran Bailey rose unchallenged to score with a thumping header to restore Shepton’s lead.

The final 20 minutes saw Wellington take the game to the visitors as they went in search of a second equaliser and they felt hard-done-by when their penalty appeals were turned down after a cross struck the arm of a home defender.

It was a strong display by Wellington and, despite the result, Legg will be able to draw on far more positives than negatives from his squad, which is showing a great deal of early promise.

U18s bow out of league cup

A team stay top despite defeat
Scroll to top