Lights go out on six-goal thriller

You are here: Home1 / Lights go out on six-goal thriller

A scintillating local derby at the Playing Field on Wednesday night came to an abrupt end when it was abandoned in the dying minutes after a floodlights failure.

The game was preceded by a minute’s applause (pictured) for one of the club’s greatest players, Mick Gough, who had sadly passed away the previous weekend. 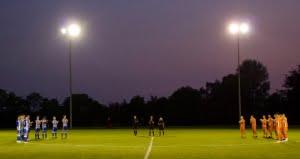 And the popular striker, who terrorised defences for so many seasons, would have thoroughly enjoyed an enthralling contest which saw the sides trade six goals before the disappointing conclusion.

The hosts went ahead after 15 minutes as the ball broke to Jamie Vaughan-Ryall and his shot from 20 yards clipped a defender to sail up and over former Wellington keeper Jake Viney and drop into the net.

But it was two more ex-Wellington players who then put Bridgwater ahead with striker Jack Taylor and central defender Tom Ellis both capitalising on mistakes after 27 and 31 minutes respectively.

The scores were level eight minutes before half-time when Harry Walford’s cross was headed back across goal by Vaughan-Ryall and defender Josh Champion celebrated his birthday in style by diving to head home.

If the first half had been dramatic, it was a shadow of events after the interval, starting with a long injury hold-up.

Bridgwater midfielder Ryan Brereton – the son of another former Wellington player, Matt – sustained a serious knee injury and had to be stretchered off. We wish him a speedy recovery.

That failed to knock the visitors out of their stride and they regained the lead after 67 minutes with a thumping header from recent signing Chris McGrath, son of the former Manchester United and Aston Villa defender, Paul.

Defender Jason Quick produced a goalline clearance to prevent Sam Towler – also ex-Wellington! – making it 3-1 in the closing stages yet it was Wellington who then finished the stronger.

They made it 3-3 with the best goal of the game as substitute George Sinnott (also playing against his old club) cut in from the left and rifled a cracking low drive in off the far post. Shortly afterwards, they had appeals for a penalty turned down when another sub, the fit-again Glen Wright, went down in the box.

During the lengthy added-on time caused by the earlier injury, Wellington launched repeated attacks with striker Jesse Howe bringing a brilliant reflex save out of Viney.

But no-one can have predicted the final twist as – with four minutes still to play – a number of the floodlights went out, leaving the referee with no alternative but to halt proceedings prematurely.

The game will now have to be replayed later in the season … let’s hope the second meeting is just as entertaining.

Ladies start season with away draw

A team lift the Seward Cup
Scroll to top