Hit for six by league leaders

You are here: Home1 / Hit for six by league leaders

Wellington were outclassed by the early pacesetters and title favourites at the Playing Field. 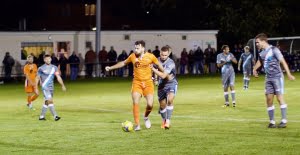 The Parkway squad is packed full of players with Southern League experience and, on this showing, they are surely odds-on to be back playing at that level next season.

They tore into Wellington from the kick-off and struck twice in the opening 12 minutes.

Parkway took the lead as River Allen was given too much room to drill home accurately from 30 yards and increased their lead when a ball into the home box saw Craig Veal nip in to head over keeper Tom Welch.

Wellington stunned the visitors by pulling a goal back after 15 minutes. A corner from the right dropped to Glen Wright and the skipper marked his first start of the season after injury by lashing the ball home.

That joy was shortlived, however, with Parkway restoring their two-goal advantage two minutes later as Veal pounced to net after Welch had saved.

When Allen made it 4-1 in the closing minutes of the first half by converting a low cross, it was all over as a contest.

Both sides made changes after the break with Parkway scoring number five after 52 minutes from a sumptuous volley by skipper Billy Palfrey.

To their credit, Tim Legg’s side refused to lie down but they were powerless to prevent sub Levi Landricombe from bursting through for another goal in injury time.

Wellington now need to put the game – and result – behind them and focus on a trip to Hallen on Saturday.

Double strike leads to away defeat

A team make progress in cup
Scroll to top