Holman double makes it two out of three

You are here: Home1 / Holman double makes it two out of three

A pair of fine goals by youngster Ollie Holman helped earn Wellington their second win in three games and moved them further up the premier division table. 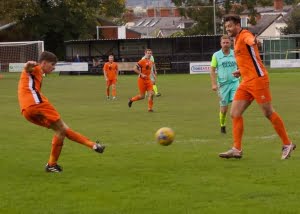 They were once again without a string of players – including both regular keepers – and their injury problems mounted as midfielder Mason Raymond suffered a pulled hamstring during the warm-up.

Defender Tom Davies was called into the starting line-up with manager Tim Legg moving up into a holding role in midfield but the re-shuffle failed to prevent them being the better side for most of the first half.

They went ahead with a well-worked goal after 24 minutes. Holman found Jack Lewis, who made ground before threading the ball through to Holman and he ran through to slip it coolly under the advancing keeper.

Wellington thought they had made it 2-0 nine minutes later as Holman found the net again after George Sinnott had hit the post only for it to be ruled out for offside.

Roman Glass raised their tempo after half-time and their increased pressure on the ball knocked the home side out of their stride.

The visitors increased their lead after 48 minutes when a cross was swung over from the right and Troy Simpson rose to give stand-in keeper Miles Quick no chance with a well-placed header.

It looked like an away win might be on the cards but Wellington regained their composure – and the lead – with a wonderful strike after 69 minutes (pictured).

Jesse Howe produced a trademark shimmy in the Roman Glass box and the ball broke to Holman who sent a delightful left-footed curler sailing into the far top corner of the net.

Legg is continuing to bolster his squad and brought on another new signing, Dan Williams, a striker who has played for both Street and Clevedon Town – where Wellington play next, on Wednesday night (ko 7.30).