A goal in each half consigned Wellington to a midweek defeat and continued their topsy-turvy run of form.

Their past four games have now yielded two wins and two losses to leave Tim Legg’s side lying 17th in the table. 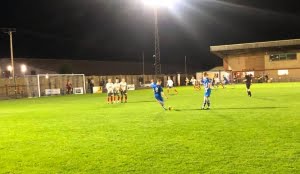 In fairness, they have not been helped by injuries to key players and, at Clevedon, Legg gave a full debut to new signing Dan Williams, playing against his former club, while also welcoming back keeper Tom Welch.

Wellington started promisingly but their neat approach work often came to nothing which was to be the pattern of their performance.

Their brightest move in the 21st minute ended with home keeper Harley Wilkinson smothering the ball at the feet of Ollie Holman, Wellington’s two-goal hero in their previous game.

At the other end, Jay Murray was sent racing clear on the half-hour but the son of former Bristol City favourite Scott was denied by Welch.

Clevedon were not to be denied and went ahead four minutes later. Imposing defender Glen Hayer rose to meet a cross from the left and, although Welch pulled off a reflex save from his powerful header, the ball rose up into the air and then dropped into the net.

Skipper Glen Wright went just wide with a flicked header shortly before the break but Wellington then failed to create any openings in the second half despite enjoying plenty of possession.

There was never much to choose between the sides but Clevedon sealed the points with three minutes remaining as the ball broke to sub Ethan Feltham in the box and his low shot beat Welch before going in off the inside of the post.

New bosses appointed for our A team
Scroll to top