New bosses appointed for our A team

You are here: Home1 / New bosses appointed for our A team

We extend a very warm Wellington AFC welcome to Mark Johnson and Stephen Cooney, the new joint managers of our A team who play in division one of the Britannia Lanes Taunton & District Saturday League. 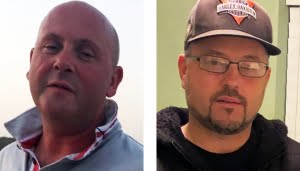 They have taken over from Luke O’Hara, who has stepped down after two-and-a-half extremely successful seasons in charge.

Mark (pictured left) and Stephen have known each other since the mid-90s. Mark moved to Devon from Leicestershire and played football for Bradninch and Culm United before signing for Dunkeswell Rovers in 1995.

Stephen had also signed for Dunkeswell Rovers at the start of the same season after playing in Exeter for Whipton AFC and Wonford.

They went on to play together at Dunkeswell for seven years before Mark emigrated to Southern Africa. Stephen stayed on for another year before moving to play for Honiton Town.

Following Mark’s return to Devon, after seven years away, they carried on where they left off by making several cameo appearances for Dunkeswell.

More recently, family and friends encouraged them both to get into football management so they started a Sunday side at Norton Fitzwarren, which ran for two years, before being asked to take over at Cotford Saints in the Keyline Somerset Sunday Football League.

Club chairman Mike Hall said: “While we welcome Mark and Stephen on board and wish them every success, we must also pay tribute to Luke on a remarkable spell as manager, which has yielded two promotions and a cup success.

“We thank him for everything he has done and are delighted that is staying on as a player and is also planning to help out on the welfare side of the club.”