You are here: Home1 / Brilliant display earns point at leaders

Wellington produced one of their best results – and performances – of recent seasons with a magnificent draw away to runaway premier leaders Plymouth Parkway … and they could even have come away with all three points.

With a huge budget and a squad packed with Southern League experience, Parkway are odds-on favourites to win the title and had thumped Wellington 6-1 at the Playing Field less than three weeks earlier. 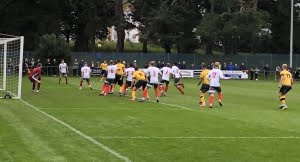 Yet they had to rely on two disputed penalties to come from behind two and earn a point as Tim Legg’s side defended valiantly while also scoring a couple of first-half goals.

As expected, Parkway took the game to Wellington from the kick-off and Levi Landricombe smacked the bar with a shot after 19 minutes before being denied by the outstretched leg of keeper Tom Welch five minutes later.

But Wellington silenced the sellout crowd of nearly 300 by taking a 26th minute lead. Skipper Glen Wright did really well on the left and his low cross was sidefooted home from 12 yards by fellow midfielder Miles Quick.

Parkway drew level seven minutes before half-time as a cross bounced up and struck visiting defender Josh Champion. The referee pointed to the spot where Ryan Richards duly obliged.

Wellington’s response was to strike again in stoppage time. Dan Williams hit the upzright with a header and, in the ensuing melee, striker Jesse Howe turned the ball goalwards where it was cleared by a defender but the assistant ruled it had crossed the line. 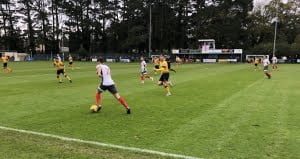 The visitors knew they would be in for a long 45 minutes and found themselves with their backs to the wall as Parkway threw everything at them without being able to get back on terms until the dying minutes.

Wellington were indebted to Welch for a pair of quite brilliant saves to keep out a Richards volley and then a goalbound rocket from River Allen before Parkway levelled in controversial circumstances with seven minutes remaining.

A corner came over from the left and sailed over a group of leaping players but the referee shocked everyone by spotting an infringement and awarding another penalty which Richards again converted.

That meant a torrid end to the game for Wellington who also had to hold out during six inexplicable minutes of injury time – but hold out they did for a richly deserved point from a superb all-round display.

The result left Parkway a mere ten points clear at the top of the table with Wellington remaining 17th – and that sums up the magnitude of visitors’ effort.

Unbeaten ladies move up into third
Scroll to top