You are here: Home1 / Unbeaten Reserves stay top of table

It was another fine day for the Reserves at the Playing Field on Saturday, as they made it five wins from five games to stay top of the table before another bumper crowd. 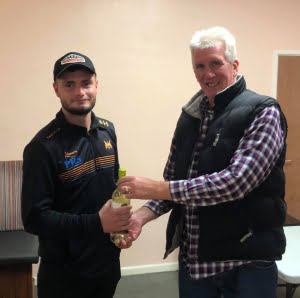 Unlike the previous week, Wellington came out firing. Playing down the slope they produced some lovely pass and move football early doors, leaving their opponents chasing shadows. Their confident play produced a superb opening goal in the 12th minute. Liam Thorne collected the ball on the left, saw Luke Perry breaking through the middle and played an instant inch perfect through ball. Perry, starting a game for the first since his long injury layoff never broke stride and clinically bent a first-time strike past the travelling keeper from the edge the box.

Two minutes later, it was nearly two. A Wellington free-kick landed at the feet of Connor Foster in a crowded box and his well-struck shot beat the keeper but was brilliantly cleared on the line.

To their credit, Alphington were working hard to stay in the game. They showed a few glimpses of threat, but never tested the home stand-in keeper, Tom Davies. Wellington extended their lead in the 24th minute. Another free-kick on the right was delivered deep to the far post. Thorne met the ball and fired it first time back across the goal for the ever-alert Perry to smash home from close range.

From here on, Wellington took their foot off the pedal a little and allowed their opponents too much space and time. They were too keen to relinquish possession and failed to control the game as they were before. Thankfully the defensive attributes of this team stayed solid and restricted Alphington to a couple of tame shots on Davies’ goal.

Wes Poulsom would have Wellington’s final chance of the half. The promising and busy wing-back was unfortunate when a squared pass from Perry bobbled just as he made contact. His close-range shot looped up allowing the visitors’ scrambling keeper to claw his shot to safety. The first half finished with Wellington leading 2-0. 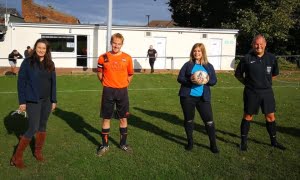 Both teams came out with renewed energy and started the second half even in effort. Half-chances were being created at each end and, in the 50th minute, Wellington had the woodwork to thank in coming to their rescue. A fierce rising volley smacked the crossbar, with Davies only able to watch on.

It was the little wake-up call Wellington needed and, eight minutes later, Perry would win a penalty. Man-handled in the box, Perry stepped up to complete his hat-trick – but the kick was not his best and was comfortably saved.

On 60 minutes, Wellington made a double change with the introduction of Clay Westcott and Logan Sellick for Perry and Holmans. A reshuffle saw Thorne pushed up top for the remaining 30 minutes. The change seemed to work as the hugely impressive skipper Mark Owen released Rohan Poulsom down the right. With a lot to do, Poulsom’s first touch saw him cleverly head the ball over his marker, before spinning passed the bewildered defender. His pace was electric and took him clear of his pursuers before finished the chance off with an excellent low drive into the far corner.

At 3-0, Wellington looked like they could go and get more, but it wasn’t to be. Poulsom had the clearest chance, sent clear by Wescot,t but his attempted chip was easily collected, when a low shot would have been more effective. Aaron Hawkings would see a 20-yard drive well saved and the resulting corner was met by Jamie Fleet, but his far post header went the wrong side of the post.

There would be a 90th minute consolation for the visitors – a penalty, unfortunately conceded and well despatched to give the final scoreline of 3-1.

Man-of-the-match, presented by supporter Andy Govier, was Hawkings and the players and management would like to thank Southwest Janitorial of Wellington for their generous support in sponsoring the match ball. Also big thanks to all who took the time to come and cheer on this great bunch of lads. On Saturday, Wellington travel to Tiverton to take on Westexe Park Rangers