A goal in the dying minutes foiled Wellington’s bid to take a second successive point off one of the premier division’s high-fliers in a pulsating contest at the Playing Field. 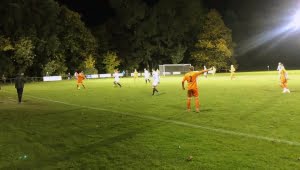 Tim Legg’s side were looking to build on their brilliant 2-2 draw away to runaway leaders Plymouth Parkway while Tavistock – 7-1 winners at Odd Down in their previous game – knew that victory would hoist them into second position.

Legg stepped down to the bench for the match, with his place taken by Tom Davies, while Mason Raymond returned from a hamstring injury in midfield, replacing Dan Williams.

Tavistock were quick out of the blocks and Wellington had a couple of early let-offs before almost taking the lead themselves after ten minutes as a free-kick was headed across goal by Jason Quick and the stretching Glen Wright could only head over at the opposite post.

It was end-to-end stuff with home keeper Tom Welch picking up where he left off at Parkway by producing another outstanding performance. 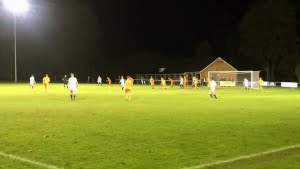 Neither side made the breakthrough before the break, and it was a similar story as the high tempo was maintained in the second half.

Tavistock’s Jack Crago was played in three minutes after the re-statrt but curled his shot over the angle and then, after 71 minutes, Wellington’s Scott Merritt found Ollie Holman with a great pass and, although the youngster beat keeper Tom Watson, the ball rolled agonisingly past the post.

The visitors threw everything at Wellington but became increasingly frustrated by the excellent Welch, some valiant defending and a couple of missed chances.

However, they finally made the breakthrough in the 88th minute as a cross from the left was deflected on its way into the box and, from among a crowd of players, Crago powerfully headed home to spark wild celebrations.

There was even time for Wellington to see an up-and-under into the Tavistock area headed off the line by a defender before the final whistle went to end an excellent advert for Toolstation League football.

Legg will have been naturally disappointed by the final outcome but will have been pleased with another demonstration that his re-vamped squad are proving to be no pushover against the top premier teams this season.

More home action on Saturday as Wellington host Bristol-based Cribbs – who have won four games on the trot – in a match kindly sponsored by South West Nissan.

Unbeaten ladies move up into third