Our Reserves completed an early season double over Westexe, 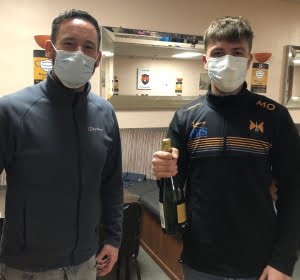 maintaining their 100% start with a sixth straight league win.

Westexe came out with clear intentions and were soon testing Wellington’s physical resolve. An opening ten minutes of high workrate and hard challenges from the home side certainly tested this emerging squad. But, as with previous weeks, Wellington showed they have the metal capacity to ride out the challenges and impose their own game on the opposition.

As Wellington began to take control, it became apparent their passing and movement could prove too much for their hosts. With 14 minutes on the clock Wellington got their noses in front. Luke Perry fed Rohan Poulsom on the right ad he raced into the box before squaring for Liam Thorne to drive home.

Five minutes later it was 2-0. The busy Poulsom was fouled wide on the right, brother Wes took the resulting freekick and delivered a ‘come and get me’ ball which two attackers missed but young Danny Nicholls arrived late at the far post to smash high into the net.

Two become three six minutes later. Wellington were now on top and were looking dangerous. It would be Perry who turned provider this time. He again fed Rohan Poulsom down the right and his pace took him clear as he cut inside and clinically beat the keeper with powerfully placed low shot.

Wellington would continue to make the running in the half, but a moment of disappointment came straight on half time when Westexe headed home from a corner to make the score 3-1 at the break.

The second half would go much the same way as the first, although this half would see the visitors keep a clean sheet. Rohan Poulsom thought he’d increased Wellington’s lead just three minutes into the second period but a somewhat dubious offside scrubbed it off.

Westexe would battle well and introduced fresh legs early on to keep the wolves at bay. They threw in some tasty tackles and challenges, but Wellington were never intimidated. Matt Holmes and Connor Foster were equally equipped in midfield as were Mark Owen, Jamie Fleet and Nicholls in support at the back.Logan Sellick and Oliver Nott were introduced in the 60th miute, replacing Thorne and Holmans.

Wellington were now creating chances at regular intervals and the fourth was seemingly only a matter of time. It came in the 64th minute and what a goal. A passing move of the highest order involving all but keeper Rob Hall saw swift passing from side to side finally leading to Wes Poulsom delivering a goal on a plate for Perry to walk in from six yards.

Hall would be involved though in the 67th minute. Pulling off an excellent save high to his right after a rare successful foray forward by the home side. Jake Nicholl was introduced into the game on 68 minutes for the impressive Wes Poulsom. It was 5-1 soon after. Good work from Foster put Nott in space down the right. His whipped low cross was about to be finished by Poulsom, but the home defender got there first and put into his own net.

Poulsom would not denied his second of the game though. With 15 minutes left and Wellington dominating their disheartened hosts, the hard-working Foster would see his shot come back off the post, leaving an easy tap-in for Poulsom to complete the scoring.

All in all this was another fine performance from this improving squad. Just a shame to concede. Foster was named man-of-the-match and is pictured with supporter Dave Poulsom.

On Saturday, Wellington are home to Uplowman, 3pm.

Another tough game for our A team against another very good side.

Wembdon started off the better side playing downhill and testing the Wellington goal several times early on.

Despite the pressure, Welly did present a threat going forwards leading to a couple of half chances which went wide – Tom Scarlett and Myles Evett not managing to hit the target.

Eventually Wembdon’s pressure created the first goal from a ball over the top, shortly followed by more defensive errors which quickly led to the score being 5-0 at half-time.

An early goal by Aaron Merry, followed by good possession and a higher work rate in the second half looked like a fightback might be on the cards but Wembdon soon restored their five-goal advantage.

More great teamwork led to further Welly chances but no goals and Wembdon finished it off with another soft goal from Wellington’s perspective.