You are here: Home1 / Another late goal means home defeat

Wellington’s late-goal curse struck for the third successive game as they went down to an agonising defeat by another of the premier division’s in-form sides at a wind-swept Playing Field. 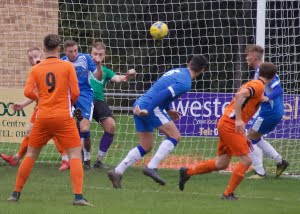 They conceded in the closing minutes in the 2-2 draw away to leaders Plymouth Parkway, the 2-1 midweek defeat at home to second-placed Tavistock and then suffered the same fate against a Bristol outfit, who made it five league wins on the bounce.

Manager Tim Legg made one change from the line-up who competed so well against Tavistock, George Sinnott replacing the injured Ollie Holman.

The game got off to a cagey start with both sides struggling to adapt to the tricky conditions and the first serious effort on goal didn’t arrive until the 24th minute when home skipper Glen Wright’s goalbound header struck a defender and was cleared.

The deadlock was finally broken by Cribbs four minutes before half-time. A free kick was floated into the Wellington area and Ross McErlain rose to score with a downward header. 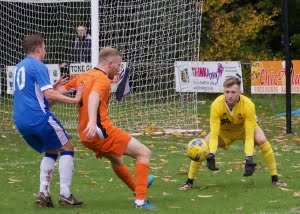 Both sides produced some neat approach play which came to nothing in the final third until Wellington drew level with a goal out of the blue just after the hour mark.

Striker Jesse Howe picked up the ball more than 25 yards out and set his sights before drilling a low drive past keeper Fraser McDonald.

The equaliser sparked Wellington into life and they took the game to Cribbs as they went in search of a second.

However, the turning point proved to be the introduction of experienced ex-Taunton Town striker Steve Murray by the visitors.

First he ran at the home defence before pulling the ball back to Dan Webb, who missed the target from close range, and then – with four minutes remaining – he wriggled into space in the box before his shot was deflected past keeper Tom Welch for the winner.

At least Wellington can now re-group as they have a rare blank midweek before a challenging trip to Exmouth Town next Saturday.

A team beaten despite bossing game
Scroll to top