You are here: Home1 / Sunk by winger’s double strike

A goal in each half by skilful winger Ben Steer condemned Wellington to their third successive defeat as Exmouth Town moved up into fourth in the premier division table. 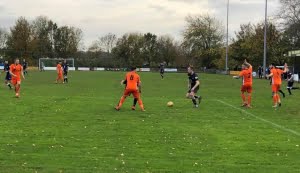 Manager Tim Legg has seen a run of tough fixtures coincide with a string of injuries to key players although he has bolstered his squad by re-signing defender Mike Mullen and striker Paolo Borges, who both came on as second half subs.

Without defender Jack Lewis, midfielder and skipper Glen Wright and striker Jesse Howe, Legg played himself in a midfield role with Jack Bown-Porter at left-back and Jamie Vaughan-Ryall up front.

But Wellington struggled to match an all-round strong Exmouth outfit who were on top for most of the game, particularly in the first half.

They went head after 13 minutes with a fine individual effort by Steer. He picked up the ball on the left and beat two defenders before cutting inside and firing powerfully across keeper Tom Welch and in off the underside of the bar.

Despite having their backs to the wall, Wellington thought they had equalised just after the half-hour. A low shot by Mason Raymond was parried by keeper Robbie Powell and Vaughan-Ryall pounced to net but the flag was up for offside.

The visitors were reduced to ten men as midfielder Scott Merritt was sin-binned either side of the break and they got off to the worst possible start to the second half by conceding again. A cross dropped to Steer in the box and he clinically volleyed home.

Although Exmouth always looked more dangerous – with Welch having another fine game in goal – the game became more even although the final outcome was never in doubt.

This proved to be Wellington’s last match before lockdown as the home game v Bridgwater Town on November 4th was subsequently called off by mutual agreement between the clubs.

A team beaten despite bossing game

Ladies enter the break on a high
Scroll to top