Wellington moved into the first round of the FA Vase – and picked up £725 in prizemoney – with a local derby victory at Bishops Lydeard.

But they made heavy weather of their success against a side currently lying 19th in the division below them – leading twice and eventually going through on penalties.

There was certainly plenty of spice to the tie with both sides including players facing their former club and Lydeard now managed by former Wellington boss Paul West. 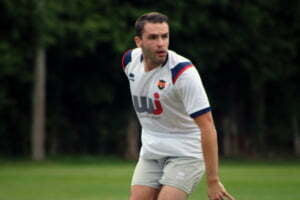 Tim Legg’s side saw the return of players missing from the previous week’s disappointing defeat by Brislington and also included defender Mark Cornish  (pictured) signed from Lydeard in midweek.

They got off to the best possible start by taking the lead with a well-worked goal inside two minutes as the ball was played out to Jack Bown-Porter and the defender calmly slotted past keeper Nathan Whatley.

But any thoughts Wellington had of an easy afternoon were upset with a Lydeard equaliser after nine minutes. A cross came over from the right and Douglas Camilo’s header deflected into the net off defender Tom Stone.

The visitors regained the lead after 28 minutes with another goal from midfielder Glen Wright. A throw was flicked on by Jordan Casey and the skipper scored with a cracking volley.

Lydeard refused to lie down but received a helping hand with their second equaliser two minutes before the break. Wellington gave the ball away and Zak Ryder was sent racing clear to beat keeper Shay Allen.

Playing down the slope in the second half, Wellington took the game to the home side and dominated proceedings without being able to restore their lead.

They should have clinched the tie after 69 minutes when sub Josh Baker was sent crashing to the ground and the referee award a penalty only for Sam Towler to stroke his kick wide of the goal.

It ended 2-2 after 90 minutes and so the game went straight to penalties.

While Wright saw his kick saved, Lydeard missed the target with one kick and Allen saved another before Towler made amends by netting the decisive penalty to clinch the victory.

Ladies pipped on their travels