Wellington completed their second double of the season with a hard-earned victory over Bridport at the Playing Field. 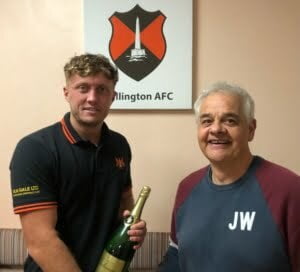 They made heavy weather of beating a side who are rooted to the bottom of the table and who they dispatched 4-0 in Dorset a few weeks earlier.

Bridport started brightly and gave Wellington a couple of scares but the home side then took control of the play without being able to break down their stubborn opponents – and that was to be the story of a frustrating afternoon.

Keeper Greg Taylor kept the visitors in the game with a string of fine saves, the best in the first half coming from Glen Wright’s goalbound header.

But he was powerless to stop Wellington finally ending the deadlock in the 43rd minute. Fine play on the right by Champion saw him cross to Jack Quick and the striker neatly set himself up before shooting home.

Legg introduced recent signing Douglas Camilo for the second half in an effort to shake things up but to no avail.

Wellington again controlled the play without being add to their tally, keeper Taylor pulling off a couple of smart stops.

First, Bridport defender Daniel Baggs was sin-binned and then, in injury time, home skipper Glen Wright was given a straight red for a lunging challenge.

Despite their dominance, Wellington had to repel a couple of Bridport attacks at the death but held out with ease for three valuable points.