Wellington stretched their unbeaten run to three matches with a hard-earned point against mid-table Clevedon at the Playing Field. 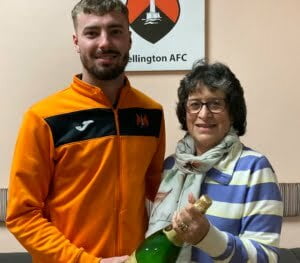 It was honours even when the sides met at Clevedon in August and again the sides could not be separated after a game which was entertaining despite a lack of chances.

Wellington got off to a flying start when they were awarded a penalty after seven minutes. Camilo was sent tumbling in the box and Sam Towler stepped up to make no mistake from the spot.

Clevedon had a “goal” disallowed for offside shortly afterwards but it was the home side who should have doubled their lead with 18 minutes played. Miles Quick squared the ball to his brother Jake in front of goal. The striker seemed sure to score but he scooped his shot over the bar.

The visitors were always dangerous going forward without troubling the Wellington goal and it took something special to earn them an equaliser after 57 minutes.

Miles Quick was left writhing in agony after a heavy challenge in midfield, the ball broke to Syd Camper and he gave keeper Shay Allen no chance with a superb shot from distance.

Both sides pressed for an equaliser with Allen pulling off a couple of smart saves in the home goal.

When the final whistle blew after six minutes of injury time, the draw was a fair result.

PHOTO: Man of the match was central defender Jordan Casey who received the award from Assistant Secretary Jane Brown.