You are here: Home1 / Run ended by derby defeat

Depleted Wellington conceded a quick-fire double as their ambitious local rivals came from behind to earn victory at Fairfax Park. 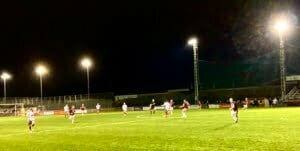 Bridgwater had won 3-0 at the Playing Field less than a month earlier but they had suffered a surprise home defeat at the hands of Millbrook in their previous game.

Already without suspended captain Glen Wright and injured defender Tom Stone, Wellington’s starting 11 was also missing midfielders Miles Quick and Sam Towler, who both picked up injuries during the 1-1 draw with Clevedon Town.

In came Scott Merritt and Nathan Byrne and they started brightly before stunning the 300-plus home crowd by taking the lead after 19 minutes. Merritt swung over a pinpoint cross from the right and Jake Quick ran in to head past ex-Wellington keeper Jake Viney.

They were unable to keep their lead for long, however, as Bridgwater responded almost immediately when the ball broke to Nick Woodrow, who drove home the equaliser.

It was still all-square at the break before the hosts took the lead 11 minutes after the restart with a free-kick from left powerfully dispatched by the head of central defender Jordan Greenwood.

Bridgwater went in search of a third goal to seal the points but a couple of headers missed the target while keeper Shay Allen did brilliantly to push George King’s fierce drive on to the bar and over.

At the other end, Wellington skipper Jack Bown-Porter forced Viney into a full-stretch save and the visitors’ hopes of salvaging a point were helped as Bridgwater’s Tom Llewellyn was sin-binned with 11 minutes left.

However, the midfielder returned to the action for the closing stages and scored his side’s third goal in stoppage time from pass by another ex-Wellington player, striker Jack Taylor.

The result ended Wellington’s three-match unbeaten run but they will be looking to get back on track at Shepton Mallet this Saturday.

Mr T takes over the A team!
Scroll to top