You are here: Home1 / Penalty paid for missed chances

Wellington paid the price for missing a string of first-half chances as they were beaten by Toolstation newcomers Helston Athletic at the Playing Field yesterday (Saturday). 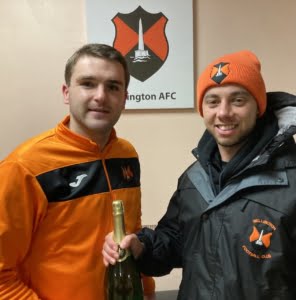 Manager Tim Legg was missing four players from the side which won at Keynsham the previous week and yet his re-shuffled line-up should have seen off the title hopefuls from Cornwall before half-time.

With brothers Miles and Jason Quick, Mason Raymond and Scott Merritt all absent, in came Josh Champion, Josh Baker, Harry Walford and Theo Simpson while there was a place on the bench for Joe Chamberlain, who has re-joined the club.

Helston – with former Wellington boss Leigh Robinson in their technical area as coach – have only lost once so far this season and will go top if they win their games in hand.

But it was the home side who created the early openings, skipper Glen Wright seeing a header smack against the post after only eight minutes.

Keeper Corey Harvey, who played for Mousehole against Wellington on the opening day of the season, was in excellent form as the hosts were left kicking themselves with both Simpson and Walford failing to convert one-on-ones.

Simpson also saw a shot blocked as he seemed certain to score before the deadlock was finally broken just after the half-hour.

Man-of-the-match Mark Cornish produced one of his trademark bursts forward and, although Harvey smothered his effort, Simpson was on hand to stroke home the rebound.

At the other end, Harvey’s opposite number Shay Allen also produced a couple of fine saves while Simpson was again foiled when put clear again five minutes before the break.

Wellington then got off to the worst possible start to the second half as Helston equalised within a minute of the restart.

Their star man, winger Billy Tucker, cut in from the left, stopped and turned before sending an unstoppable shot into the top corner.

Helston then took the lead in disputed circumstances after 58 minutes. Allen was judged to have brought down striker Stu Bowker and Tucker made no mistake from the resulting penalty.

But there was no doubt about their third goal 20 minutes later, Tucker playing a perfect pass forward to the experienced Bowker who made no mistake.

Although it was a disappointing result, Wellington will take heart from having stretched one of the division’s top sides to the limit as they continue their development under Legg and coach Alex Pope who is pictured presenting Cornish with the man-of-the-match award.

Brooke starts for England in the Algarve