Goals either side of half-time saw Wellington fail in their bid to reach the final 32 of the FA Vase for the first time in the club’s history. 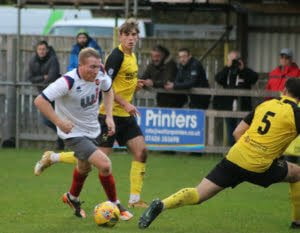 But at least they had the consolation of picking up £350 in defeat to take their total prizemoney in this year’s competition to £2,800.

Manager Tim Legg made four changes from the side beaten by title hopefuls Helston with brothers Jason and Miles Quick returning along with Scott Merritt and Mason Raymond.

Wellington had been thumped 6-1 at Buckland in their second game of the season in the Toolstation premier but this time their defence was far more resilient.

Although Buckland – lying eighth in the table, six places ahead of Wellington – enjoyed more possession in the first half, it looked like the two sides would go into the break locked together at 0-0.

But the Newton Abbot side broke the deadlock in the final minute of the half as a well-worked move ended with Owen Stockton stroking the ball past keeper Shay Allen.

But, almost straight away, Buckland doubled their advantage. The ball was played into Charlie Johansen and, although the striker was running away from goal, he swivelled to shoot past Allen and just inside the far post.

Legg used all three subs – including a return from injury for Sam Towler – and also switched to playing three at the back.

That sparked Wellington into a late rally but they were unable to break through a stubborn Buckland defence.

The home side were reduced to ten men in the dying minutes when Stockton received a second yellow but it was too late to make any difference to the result.