You are here: Home1 / Cup defeat by title hopefuls

Wellington bowed out of the Toolstation League’s Les Phillips Cup at the hands of Exmouth Town tonight (Wednesday, 2nd).

Manager Tim Legg rang the changes following three successive home draws and his side included new signing Heon Jin, who has joined the club on loan from Tiverton Town. 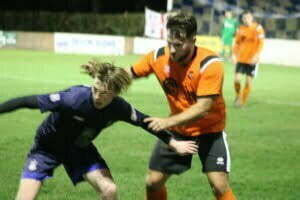 Exmouth are currently second in the premier division, with title aspirations, but Wellington held them until the stroke of half-time.

The visitors failed to clear their lines and the ball broke to Nathan Cooper who shot low past keeper Shay Allen.

Legg threw on all three subs for the second half with Joe Chamberlain, Sam Towler and Jin replacing Harry Walford, Jake Quick and Miles Quick.

And Chamberlain almost put Wellington back on level terms straight after the re-start but was unable to get a clean connection at the far post.

Ironically, it was an Exmouth sub who was the difference between the sides after the break as they introduced former Plymouth Parkway and Tiverton Town striker Levi Landricombe.

He doubled the home side’s advantage after 69 minutes when Wellington again got into a muddle at the back and he sent a long-range lob sailing over Allen into the net.

Five minutes later, Landricombe sealed a place in the second round for his side with another quality finish, giving Allen no chance with a thumping volley.

The 3-0 scoreline rather flattered Exmouth and Wellington won’t be too downhearted to be able to concentrate on the league, starting at home to Keynsham Town on Saturday.

Towler makes it a hat-trick of draws

Twins combine for the double
Scroll to top