You are here: Home1 / Frustrating trip into Cornwall

Wellington endured a frustrating afternoon in Cornwall as they were beaten by Saltash, who moved into the top four. 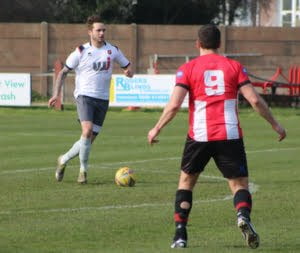 Manager Tim Legg was missing both Tom Stone and Jordan Casey but his side started well with a strong and biting wind in their faces.

However, it all went wrong in an incident-packed final 15 minutes of the first half.

Wellington were reduced to ten men when young midfielder Jamie Nicholson was harshly sent off for a high challenge.

And, four minutes later, Saltash took the lead as Sam Hughes was given too much room to turn and shoot home.

Wellington certainly show plenty of character these days and hit back to equalise in the first minute of stoppage time, sub Josh Baker heading home a Josh Champion cross.

But their celebrations were shortlived as Sam Davey broke clear to restore the home side’s lead before the break.

Wellington appealed in vain for offside, resulting in Jason Quick being sin binned.

As a result, they had to play the first ten minutes of the second half with only nine men but weathered the storm and were still in the game.

Wellington felt aggrieved shortly after the restart that Saltash weren’t also reduced to ten men as Neil Slateford escaped with a yellow card for a very similar challenge to the one which saw Nicholson dismissed.

But they regained their composure and almost drew level after 70 minutes when Mark Cornish volleyed over from a Sam Towler free kick.

With a man disadvantage, the visitors naturally tired and Saltash wrapped up the points 12 minutes later when Rubin Wilson finished off a slick passing move.

We return to action on Tuesday night with a trip to Bristol to take on Brislington.

It’s another late show to earn a point