You are here: Home1 / Ladies hit eight in cup victory

Our Ladies started their League Cup campaign as they faced Pen Mill Ladies Reserves for the fourth time this season.

Consistent performances against Pen Mill so far gave Wellington an added boost in confidence leading into the game and it showed in the early stages of the match with Jess Regan grabbing two goals in the first 20 minutes.

With Wellington ahead early, the floodgates began to open and Wellington scored two more before half-time through Player-of-the-Match, Tash Hole.

As the sun’s heat beamed down on to the pitch, the home side kept bringing heat of their own and kept the bombardment of chances flying at the Pen Mill defence.

Tash, completing her hat-trick, managed to grab another two goals before the hour mark to increase Wellington’s lead to six.

An uncommon but vital mistake at the back saw Pen Mill grab their first and only goal of the game, but Wellington were happy to brush it off and focus on making sure they got the most out of the afternoon.

Sid Clarke proudly grabbed her first Wellington goal just after 70 minutes, and Tash finished off an outstanding afternoon performance by grabbing her fifth of the match.

This dominating performance ensured Wellington glided into the next round, travelling to play Bishops Lydeard Reserves on April 10th.

Next up, Wellington return to their nailbiting league title contest as they visit bottom-of-the-table Combe St Nicholas Ladies in a must-win fixture. 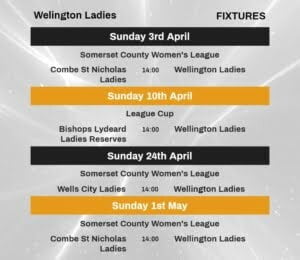 Back to winning ways in the sunshine