You are here: Home1 / Quick, Quick show for Welly

Goals either side of half-time by brothers Miles and Jake Quick earned Wellington their second successive home win.

Manager Tim Legg was missing keeper Shay Allen and defender-turned-striker Jordan Casey so Rob Hall came in for his home debut and Miles Quick was drafted in up front.

After a cagey opening, Wellington gradually got on top and Miles Quick almost broke the deadlock as his looping header from a Nathan Byrne cross came back off the bar after 25 minutes. 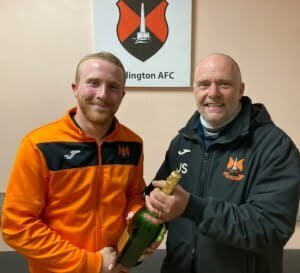 But he made no mistake four minutes before the break when Jake Quick lobbed the ball across goal and this time his brother’s header looped up and dropped into the net.

Wellington doubled their advantage six minutes into the second half with probably their best team goal of the season.

They played the ball out of defence with some slick passing, ending with Douglas Camilo being released by Eli Collins down the right. His low cross found Jake Quick who brought it under control before driving the ball home.

Millbrook, making their first visit to the Playing Field, went close on a couple of occasions as they attempted to get back into the game.

But Wellington regained control to see the game out comfortably for three well-deserved points.

PHOTO: Man-of-the-match was defender Jason Quick and he received the award from John Sellick, who runs our thriving Wildcats girls’ section.

Victory puts Ladies back on top
Scroll to top