You are here: Home1 / Club in a sound position – AGM told

Our Treasurer, Reg Oxby, reported that the club was in a sound financial position at the Annual General Meeting.

A loss of £8,880 was shown on the season, however, there had been substantial expenditure on repairs to the clubhouse roof and the purchase of new coolers for the bar – without these expenses the accounts would have shown a profit. The Club had been fortunate in obtaining grants to assist in recovering from the effects of the Covid pandemic and were also extremely grateful to their numerous sponsors and benefactors for the support received and, by keeping expenditure continually under review, were able to run without relying on loans. 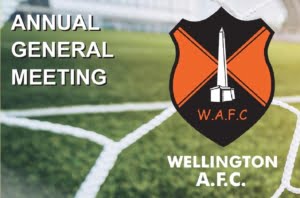 Thanking the Treasurer for his report, Club Chairman, Mike Hall said that, despite a drop in revenue, the club remained in a strong position, which should once again enable it to deliver on its commitment of providing football for all and continue to pursue its objective of improving the number and quality of football facilities in the town. Although there was still much work to be done to achieve this objective, the support received from Wellington Town Council and Somerset West and Taunton Council was greatly appreciated.

In opening the meeting, the Chairman said that this had been the first full season since 2018-19 and had, at times, felt long and challenging both on and off the pitch but had also been enjoyable. The Club ran approximately 30 teams providing football for girls and boys from the age of three to 18, with four senior teams and three disability teams which was a wonderful achievement.

He paid tribute to the club’s officers for their hard work and also thanked all team managers and coaches, matchday helpers, bar and catering staff and the numerous other volunteers for the team effort everybody showed in supporting the club. Help was always appreciated and not taken for granted.

In his Secretary’s report, Jeff Brown said the first team, under manager Tim Legg and Alex Pope, were able to add a few new faces to the squad and develop their style of play which improved as the season progressed. The Toolstation Western League had taken on a new shape with several teams on the northern fringes of Bristol and beyond moving to play in the Hellenic League while leading teams from the South West Peninsula League from both Devon and Cornwall had been promoted to present new challenges.

They finished a creditable 14th in the league as well as enjoying a record-equalling run in the FA Vase.  Four wins and a draw in their last five games augured well for the future and it was hoped that most of the squad would remain with the club to sustain the improvement in readiness for the reorganisation of the Toolstation Western League Premier Division in 2023-24.

The Reserves, under the guidance of manager Steve Trevelyan, assistant James Baker and Mike Owen, enjoyed a successful but challenging season in the very competitive First Division of the Devon and Exeter League finishing in fifth position, just three points off a promotion spot, having also enjoyed a run of four wins and a draw in their final five games.

The season had not been without its difficulties as there were a number of occasions when it had been difficult to raise a team but this has given a number of young players the opportunity to start progressing through the club.

The club were disappointed that both Steve and James were stepping down from their positions but wished to thank them for their input and hard work this season. Again, it was hoped the squad would remain with the club to give the new manager a good platform from which to work.

The A team, playing their second season in Division One of the Taunton Saturday League, following their previous promotion, finished in fifth place under .anager Warren Toth – supported by Connor Porter – who took over the reins in the early part of the season from Luke O’Hara.  Despite, on occasions being left short of players, the nucleus of the team, well supported by a number of youth team players, had achieved a more than a creditable result in gaining eight wins and two draws from their 18 games as well as reaching the final of the West Somerset Rosebowl. Thanks to Warren for all his hard work – he will be assisted by Reegan Scotcher for the next campaign.

The Ladies team had a very successful season, finishing in a closely contested second place in Division Two of the Somerset County Women’s League losing out to Wells City only in the penultimate game of the season. Thanks were due manager Nyima Touray and Anthony Trimm for their work during the season.

Once again, the Under 18s’ season was frustrated by continual postponements and, ultimately, the team were withdrawn from the League. Many of the players had, however, progressed and provided much valued support for the A team and, on occasions, the Reserves.

The  Disability Teams were again well marshalled in the Somerset Ability Counts League by manager Jason Fox and his assistants Dale Harraway and Paul Short and their enthusiasm was clear to see while all of the youth teams – under the auspices of Colin Waller and John Sellick – continued to acquit themselves well.

Such a large diversity of teams experiencing mixed fortunes on the pitch required a continuing small army of helpers and the club must thank all those who worked hard to ensure such a large number of adults and young people were able to enjoy the game.

Mr Brown said the club continued to pursue its interest in locating some of its activities to Longforth Farm but, having secured Section 106 Funding and further support from Wellington Town Council, were shaken by the revelation that a Deed of Variation was agreed in 2018 allowing for an access road across the site and that some of the required land been ‘reclaimed’ by the developers. It was hoped the councils would meet the developers soon and that these problems would be resolved and allow progress to be made.

In the meantime, it was hoped the purchase of land between Court Fields School and the Basins would lead to the provision of badly-needed youth team pitches.

Welcome to our new Sports Therapist
Scroll to top